Johns Creek has a new look to the City Council for 2018, and I consider that a very good thing.

Residents returned Stephanie Endres to the City Council for 4 more years.  Endres has been asking the right questions since well before she was elected the first time, during her numerous Public Comments made challenging what the Council was doing.  We are very fortunate to have her back and continuing to do what she does best.

Lenny Zaprowski who also was re-elected, is now the Mayor Pro Tem.  This is a welcome change.  It is critical for the residents that this position is not just someone that represents the same positions as what the Mayor represents.

I expect Zaprowski to challenge on necessary and important issues.  There are questions that must be asked of the City Staff, and sometimes the answers will not be what people want to hear, but they must be heard.  Zaprowski took a step in this direction at Monday’s Work Session when he asked how much were we going to spend and how much time was going to be saved by drivers when we widen Kimball Bridge Road.  If Zaprowski can comfortably recognize that we must challenge what the Staff says because the Staff does not know every answer(they are human), then the residents can get better solutions for our problems.

If Zaprowski realizes that he can still be nice and ask the hard questions at the same time, the results will be beneficial for residents of Johns Creek.

John Bradberry rounds out the changes to the City Council for 2018.  Bradberry worked diligently to win this seat, and now the hard work really begins.  Bradberry has been an advocate for the residents from the time he was a member of the JCCA to the formation of Preserve Johns Creek.  Bradberry attempted to bring more attention to the Billboard issues, which are still a bane on the face of Johns Creek, as well as highlight that we have a Historical African-American Cemetery that was sitting neglected.  Hopefully we can get the proper signage and care in place for that location for future generations.

There are many changes set to be pushed upon the residents of Johns Creek.  Our eyes are wide open.  The biggest tax push this year will be another 1/2 cent sales tax for MARTA/Mass Transit.

The questions need to start with ” Are buses along 141 and State Bridge Road worth $10 million a year to the residents of Johns Creek? Are residents willing to pay $10 million for something that is unproven as an congestion relief tool?”

We’ve had buses running for more than a decade supplied by GRTA.  They are empty.

Where’s the return on that investment?  If they are so underutilized, why haven’t they moved to smaller buses for this “experiment” which would be cheaper to operate?

Let’s hope that this New-Look Council can start asking these and other questions BEFORE we are forced to make a decision with the legislative gun to our heads once again.

If you have read my work over the years, then you know that I am not a proponent of Minimum Wage.  An adult should be able to work for anyone at an agreed price.

However, a new issue has come into my view I did not realize existed until recently.

Apparently there are groups out there (think Chamber of Commerce) that works with your local governments to hold wages down by: 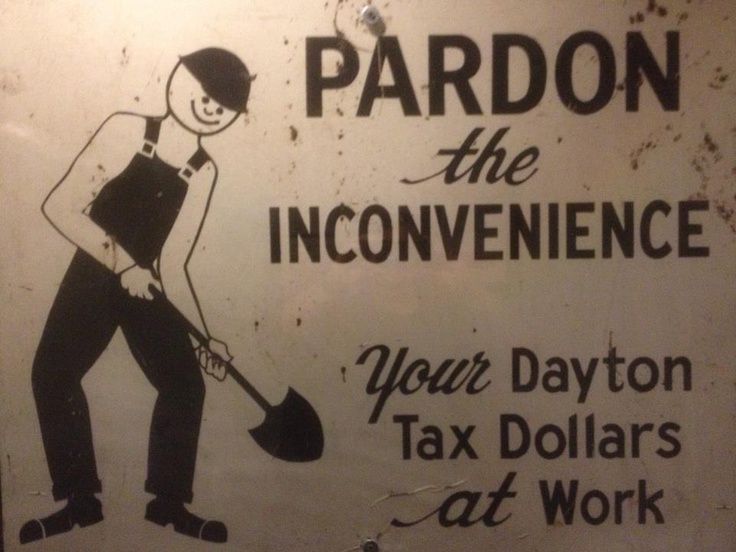 And chances are, you’d be wrong. END_OF_DOCUMENT_TOKEN_TO_BE_REPLACED

MARTA is in the news a lot lately in Fulton County, as they push for more funds to expand heavy rail, especially in North Fulton County.  We are told of the benefits of MARTA, and one could argue that there are indeed benefits, especially for those that do not own vehicles.

MARTA is pushing today for a sales tax increase that would increase their sales tax revenues by 50%.  By doing so, Fulton County will be increasing the subsidies that are given for each MARTA rider.

But what is the true cost of of this Mass Transit system today, and where do the funds come from?  Is it a positive or negative expense when it comes to other modes of transport?

Only 22% of MARTA’s funding comes from fares.

Twenty-two per cent of MARTA’s funding comes from Fare Revenue, 58% from sales tax revenues, and the other 20% from other sources such as State and Federal government.  What would it cost if MARTA relied entirely on fares, and not on sales tax dollars,and federal and state dollars? END_OF_DOCUMENT_TOKEN_TO_BE_REPLACED 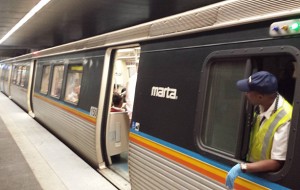 Since the beginning of the Mass Transit era in the Atlanta metropolitan area, I’ve constantly heard the arguments that the reason people were against the transit system was racism.

This is usually the moment that the local politician or commentator makes the statement about how people feared that their homes would be broken into and their tv set stolen and taken away on a bus or train. It’s a tired example, and an inaccurate example. END_OF_DOCUMENT_TOKEN_TO_BE_REPLACED 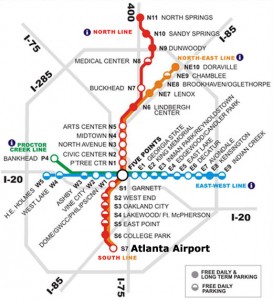 This also creates another major problem.  If MARTA has a failure between Lindbergh and the Airport, or between Holmes and Indian Creek, it disrupts all traffic and buses muse be used.  The Washington METRO allows riders to pick another route if one of the stations happens to be on one of their circular sections of track. END_OF_DOCUMENT_TOKEN_TO_BE_REPLACED