On Friday September 27th, the City Council received the preliminary drawings for proposed Gateway Markers for the City of Johns Creek. The City Council was getting an early peak for the drawing and voting was to start this week from the residents. In less than 91 minutes from receiving the drawings forwarded by the Mayor, Council Members began to react.

Last April I wrote about how this effort was a complete waste of taxpayer monies. I also wrote the following(was I wrong?):

Is this a good use of taxpayer dollars? I’ll let you decide for yourself.

The Council reacted negatively and these drawings were withdrawn from Public View. While they were supposed to be presented and voting begin on September 30,2019, it appears that changes will now be made before presenting to the public for consideration.

How much this will cost or what the revisions are remains to be seen.

The residents of Johns Creek, Georgia have lots of things going for it.  Excellent housing, many of the best schools in the state for kids, and income levels that surpass nearly every other community.

Those positive attributes, however, have led to a flow of tax dollars into the City’s Coffers that is now doing more harm than good.

That’s an astonishing amount of money to be held per capita, and it’s growing.  Last evening, the City Council, under the lead of Mayor Mike Bodker voted to maintain the City’s millage rate at it’s current level, despite the property valuations rising sharply over the last year.  More money will be flowing into the City’s coffers again in 2016 coming directly out of the pockets of the residents.  And while it may not seem like a big deal to many outside of Johns Creek(after all, they can afford it), it is creating problems that will soon become more and more apparent as time passes.

[read more=”Read more” less=”Read less”]Incredibly, the Reserve Growth has grown at an annualized rate of 27.35%.  Mayor Bodker and the rest of the City Council have been asked numerous times why are our reserves growing so rapidly?  What will this money be used for?  From listening to dialogue at the City Council’s work session, the perception is that the public just doesn’t understand.   I think we do. I think we also know that other cities, operating under the same general rules as Johns Creek, are not rolling up such large sums of money.

Of course, some of this money is used for day to day operations as a float for paying bills and salaries as funds come and go.  But if we did not have such a large reserve fund, there would be some other financial tool to deal with  cash flow, for instance.  There would be a cost to that technique, of course.  And there are the recommendations of how much to set aside, just in case.  But it seems to me that we have more than enough set aside for a city like Johns Creek that is collecting 10 % more than they are spending year in and year out.  In fact, we have a greater margin of error than a city that barely collects enough revenue to cover expenses.

So there is absolutely no reason that the reserve funds continue to grow at such an astonishing rate without a clear explanation.  And I firmly believe that this Reserve Fund’s size is doing much more harm than good.

The size of this Reserve Fund has not kept Mayor Bodker or the City Manager, Warren Hutmacher, from speculating that one of the wealthiest cities in Georgia has a sustainability issue (despite the rapid growth of the reserve fund).  A wish list of projects was created that totals more than $180 million dollars,which would indeed suggest there is a problem.  There would be if all of these wished for items were approved.  But they haven’t been.  And like a cloud hanging over the City, this wish list is negatively influencing the decisions of the City Council.

First, there is no sustainability issue if the City of Johns Creek sticks to what it is supposed to be doing, rather than dreaming of exceptional projects that have not been proven to be desired by the majority of residents.

Second, the Reserve Fund allows for the perception that we can afford lots of lower cost projects, regardless of the return on the investment(something cities apparently are not as concerned about as the private sector).  Consequently we see 100’s of thousands of dollars allocated for purposes that might not otherwise be approved if we had a lower reserve fund and managed our decisions much more wisely.

Many residents have attempted to point out the lopsided salary structure of the City’s Employees.  They have been met with dismissive attitudes(I am being polite) and promises that this will be looked into.

Residents have pointed out that we are overpaying for certain services, and that we are wasting funds on various projects that benefit only a handful of residents or that the residents already have access to via other means.

As the monies continue to roll into Johns Creek’s coffers, there is simply no pressure to address these concerns.  The residents and the business community are both left paying for this malinvestment.

In an effort to “move the needle” on the City’s revenue sources (too much of the load is on property owners and not enough on business), the concept of a Central Business District was launched.  Several hundred thousand dollars was voted on an approved to explore this “idea”. An outside firm, Urban Design Associates, was hired to bring the concept closer to reality.

The Central Business District has morphed from a :hypothesis” that was going to generate enough revenue to help offset the $180 million in projects on the wish list to being financially accretive.

The process of accretion, which is the growth or increase by gradual addition, in finance and general nomenclature. An acquisition is considered accretive if it adds to earnings per share.

This City Council needs to apply the brakes, and hard.  The hard earned money that they are collecting from residents at these levels, which are not being spent on services deemed needs by the residents, and is inducing the Council to approve projects that offer little return on investment, needs to be returned to its rightful owners.

That means cutting the tax rates for both businesses and residents.

One of the Council Members spoke of his concern for residents where even $30 a year makes a big difference.  He voted for a rollback.

I suggest he think about the $670 already collected from those very same residents.

Johns Creek has been a city too long now to keep finding excuses as to why we do not have the budget tools in place to have a firm and clear grip on our fiscal health.

Johns Creek pays the professionals too well to expect anything less than the best analysis from the beginning.  A 10 year financial forecast that would have landed you a D in your college finance course should not be acceptable to anyone, even as a “draft”.

The performance bar must be raised.  We have too much at stake to have sub-par performance from the very same people we are paying top dollars for in compensation. 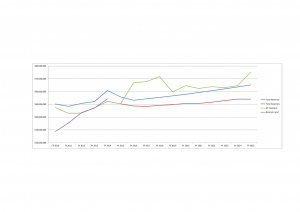 These are my opinions.  I’d love to hear yours.
[/read]